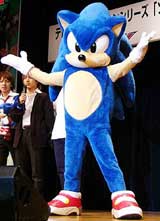 In celebration of the 15th anniversary of the spiky fella, Sega has announced the release of four Sonic the Hedgehog titles this year:

“Fans will be treated throughout the year to special 15th anniversary events, culminating with the release of three original Sonic adventures shipping later this year, as well as the original Sonic The Hedgehog Genesis for the Game Boy Advance. Sonic will make his first appearance on next-gen consoles with the dynamic new adventure Sonic The Hedgehog for the PlayStation(R)3 and Xbox 360(TM) this fall. Sonic The Hedgehog melds top-tier production values with next-gen art, physics, and game design to create the fastest and most intense Sonic experience yet. Featuring brand new interactive 3D environments, Sonic gameplay is taken to a whole new level with a large cast of new and returning characters, and a blistering sense of speed. Sonic will also debut this fall on the PSP(R) with Sonic Rivals, a one-on-one racing platformer that also features Knuckles amongst other rivals combining classic 2D gameplay with 3D worlds. Available in 2007, a new Sonic adventure is also in development for the Wii(TM) console, combining Sonic’s high velocity with the unique Wii controller and a colorful retelling of the classic tale Arabian Nights.”

Can you believe it’s been 15 years since the first Sonic game? Boy I feel old.