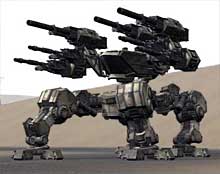 Sega of America has announced the release of it’s mech-combat game, Chromehounds for the Xbox 360. The game features 13 multiplayer modes and Xbox Live support for up to 20 players. In addition, the game has a single player mode where players experience “an alternate future where the Cold War never ended…” (now that’s a premise we’ve never heard before!)

Developer From Software’s early previews of the game looked quite promising when it was first shown back in 2005, but early reviews are mixed. The multiplayer modes are being praised for their creativity and depth, while word is that the single player mode feels more like a training mission for the deeper online experience. The game’s deep mech-building feature should satisfy any craving you might have for bot-tinkering. The game is definitely not a fast-paced arcade shooter, but this slower pace provides the game with greater strategic depth for those who are into that sort of thing. The game is priced at $59.95 USD. A downloadable demo is forthcoming on Xbox Live.