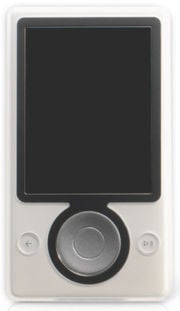 Rumor has it that Microsoft’s “iPod killer” / portable gaming device, known as “Zune” will integrate the social networking (aka “friends list” from Xbox Live) features of the previously announced Live Anywhere system. The Zune, developed by Xbox 360 guru J. Allard, is rumored to include a 30GB hard drive, WiFi capabilities for media downloads and possibly online gaming. It’s also been heard that the device will feature an iPod-esque scroll wheel and come in three colors initially.

Best speculation at present is that the device will release for the holidays at the same $399 pricepoint as the 60GB iPod and the Xbox 360 Premium. The price seems a bit high for only 30GB of storage (What’s with Microsoft and skimping on hard drives? They screwed up with the 360 – why couldn’t they could learn from that?) Also, with the brilliant Nintendo DS Lite out there for as little as $129.99, it’s going to be hard to compete with them on the gaming front.

Personally, I’m not sure this baby will be killing anything if the price remains at $399, but knowing J. Allard’s track record, I’m sure there are still surprises up his sleeve.