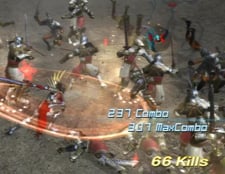 Developers Q Entertainment and Phantagram released the demo version of their Xbox 360 hack and slash title Ninety-Nine Nights on the Xbox Live Marketplace today. The game has gained alot of advance buzz due to the massive battle that can involve hundreds of enemies.

I’m still waiting for the download to complete, but early reports are that while the game looks good, it’s a bit of a Dynasty Warriors clone. With the guy behind Rez and Lumines behind the game, I was really hoping for something a little more innovative.