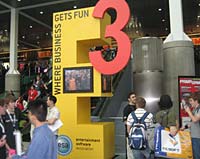 This just in… Next Generation is reporting that the Entertainment Software Association is expected to cancel the Electronic Entertainment Expo (E3) video gaming expo for the forseeable future as a result of the joint pullout of a number of major exhibitors. The trade show, started in 1995 by the Interactive Software Developers’ Association as a video-game focused alternative to the Consumer Electronics Show, it is one of the most eagerly anticipated events in the video gaming community, typically drawing about 60,000 attendees and over 400 vendors. It’s possible that a smaller show might still occur in May 2007, but it sounds like E3 as we know it may be done. An official announcement is expected in the next 48 hours.

Read More [via Next Generation]

UPDATE: Gamespot is reporting that the event isn’t likely to be completely canceled, but replaced with a much smaller event hosted somewhere other than the massive LA Convention Center – which has been home to the event until now.