Capcom’s zombies-in-a-mall actioner, Dead Rising, is now available in demo form on Xbox Live Marketplace for your enjoyment. Since I haven’t gotten to check it out yet, here are some comments posted on Major Nelson’s blog that I thought would give a good idea of what to expect… 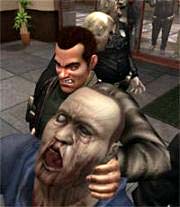 “You can (get) 15 minutes of run about in the mall. Lots of zombies walking around all at the same time on screen. Weapons in the demo are really cool considering that these are probably only small number from what we will get in full version. In the demo you get to go to sports shop, food shops, toy shop, music instruments shop, coffee bars etc etc. So much cool stuff to do that you won’t realise how quickly the 15 minutes expires and you will be ready for another set straight after. Graphics look superb and so does sound.”

I think I know what I’m doing this weekend.

[UPDATE: I’ve been playing this bad boy all night, and it’s a blast. The graphics really could not have been acheived on anything but the latest hardware, given the mass quantities of zombies on screen at once. Contrary to earlier indications, you can’t use every object in the game as a weapon, but there is a very large variety that can be picked up, and the physics of each weapon really varies. Hit a zombie with a foam filled toy and the results (and sound effects) are quite a bit different than thrashing them senseless with a golf club or a baseball bat. When things get harried, there’s nothing whipping out your scythe for some zombie decapitating goodness. The camera mode is also really fun as you try to snap photos of interesting scenes while being attacked. Once you’ve danced around in a costume bear head and killed 100 undead with a potted plant, you’ll never go back. I’m really looking forward to the full version when it comes out on Tuesday August 8.]