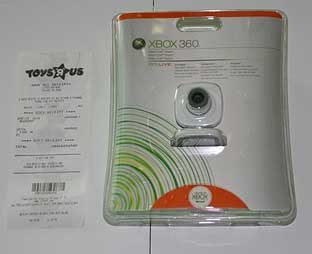 Scheduled for a September 19th release, the Xbox Live Vision camera add-on was accidentally put out on the shelves of a Toys R Us store on August 18th, and this lucky buyer managed to get his hands on one over a month early. The package included a camera, a headset, 1 month free Live Gold subscription and a registration key for Uno.

[UPDATE 8/20/2006: According to a report by Gizmodo, a limited number of cameras are intentionally available at a handful of Toys R Us stores in major markets for testing purposes and a number of them are for sale on eBay]