Sony’s latest attempt to combine a flat panel LCD with a PC has resulted in the svelte new VAIO LS1 TV/PC. The new system combines a reasonably powerful computer into the back of a flat-panel 19-inch WSXGA+ (1680 x 1050) LCD display. 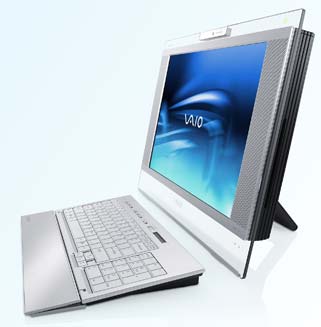 The computer features an Intel Core Duo processor, 2GB of RAM and a 250GB Hard Drive. The system also does its best to hide any cables and integrates built in cable management and comes with a wireless mouse and keyboard. In addition, the system has built-in 802.11g Wi-Fi network access.

The LS1 ships with Windows XP MCE 2005 (upgradeable to Vista when it comes out), a built-in NTSC TV tuner and DVR capabilities, but doesn’t include any HD tuning capability – which is a shame given the resolution of the screen.

The system has a (pricey) MSRP of $2100, and should hit Sony stores this September.