Creative Technology has just announced the release of their new ZEN Vision W. The new mobile media player features a 4.3 inch diagonal 16:9 widescreen TFT display (480 x 272 resolution) for video playback, and either 30GB or 60GB of hard drive storage. Creative claims that the 60GB version can store a whopping 240 hours of video or 15,000 songs. Battery life is quoted at 13 hours for music and 4.5 hours for movies. 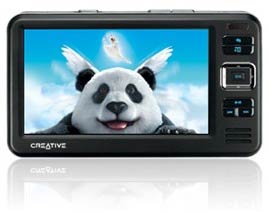 The Vision W also features a built-in Compact Flash slot, so you can easily import photos directly from a digital camera without a PC. The device supports a decent number of video codecs, including WMV9, MPEG1, MPEG2, MPEG4-SP, MJPEG, DivX 4.x/ 5.x and XviD-SP. An AV cable is also included for playback on your television (composite only, though). In addition, it includes an FM tuner, voice recorder and personal organizer software that can sync with Microsoft Outlook.