Commodore, the brand that brought us the Pet, the VIC-20 and the C64 are now bringing us another oddly named device, the Gravel in Pocket.

The personal media player was announced today at the IFA 2006 consumer electronics show in Berlin. The Gravel in Pocket features playback in a wide variety of audio, video and image formats including: MP3, WMA, WAV, MP4, MPEG, DivX, Xvid, WMV, streaming WMV, JPEG, BMP and GIF. The device only comes with either 1GB and 2GB of onboard flash memory, plus an SD slot for additional storage. A 2.8″ TFT display is on the small side, just a little larger than an iPod 5G’s screen. 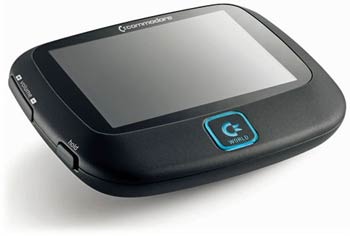 Also announced was Gravel in Home, which provides video on demand, DVR and streaming media capabilities, as well as their CommodoreWorld music and video download service. The devices are expected to be available by November in Europe, but I doubt we’ll see these devices stateside any time soon, if ever.