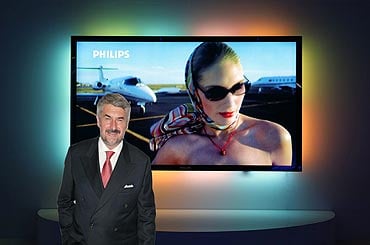 For those not already familiar with Ambilight, it provides an array of colored LEDs as a backlight source behind the set. The LEDs change colors in accordance with the subject matter on the screen, providing a viewing experience that is said to be easier on the eyes. Plus, it just looks really cool, too. The latest version, “Full Surround,” provides backlighting on all four sides of the picture, rather than just two sides as was the case in earlier Ambilight devices.

It’s not clear if the massive 100-incher will ever see the light of day for consumers, but it’s likely to show up at some point for limited commercial applications.