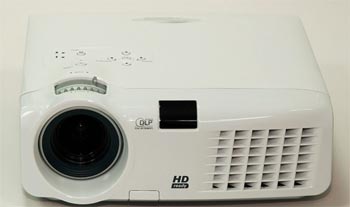 The Optoma HD70 projector features a single 0.62-inch DarkChip2 DLP chipset from Texas Instruments. producing a dynamic contrast ratio of up to 4000:1. The DLP array operates at true 720p resolution, making it capable of displaying much of the high definition content available today. The projector outputs light at a admirable 1000 lumens.