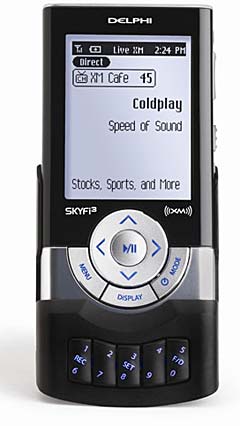 The folks over at OrbitCast came across a product page on the JJI Electronics website for Delphi’s new XM SkyFi3 satellite radio. Apparently the folks at JJI jumped the gun on this as yet unannounced radio.

Much like the SkyFi and SkyFi2 receivers before it, The SkyFi3 is a satellite receiver module designed to plug be mounted in a base station, car or boombox. The new model comes in a more compact form-factor than previous models, and touts a variety of enhanced storage capabilites, allowing up to 30 minutes of TiVo-esque replay capability and storage of up to 10 hours of XM programming, all onboard. In addition, a memory slot allows for up to 500 downloaded songs to be stored on a 2GB MicroSD card (optional.) In addition, the player features XM+Napster so you can bookmark songs for later download on your PC.

JII has since removed the page, but had listed the retail price at $199 USD.