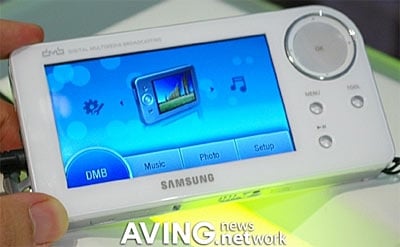 The DMB-T450 will also feature built in MP3 playback, virtual surround sound, and USB connectivity (oddly it’s USB 1.1, though). MP3s and Photos can be stored on SD memory card. Battery life is quoted at 4 hours, and the device is currently only planned for South Korea (which is pretty much the only place that you can watch any variety of DMB broadcasts so far.)