Everyone’s getting into the digital camera accessory business, what with add-ons available for the Playstation 2, Xbox 360 and Nintendo DS, the PSP was starting to feel left out. 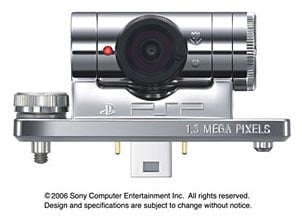 That said, Sony’s entry into the fray seems a little anemic at first glance. From what I can tell from this translated page on Sony’s Japanese website, the camera will take 640×480 and 480×272 still pictures as well as 480×272 motion jpeg clips at 30 fps, but only up to 15 seconds of recording. With those specs, I’m not sure where the “effective” 1.3 megapixel resolution that’s also mentioned will come into play.

In addition, it looks like it will ship with an application which allows for slide shows and adding special effects to pictures and for creating animations. No mention is made of support for live video feeds (i.e. ‘webcam’) capability.

The camera should hit the streets in Japan on November 2 for 5,000 yen (appx $44 USD), but there’s no announced date or price for US or European launches.