I was doing some investigating on Microsoft’s Japanese Xbox site today, and stumbled across this cool feature called the “UserMap.” 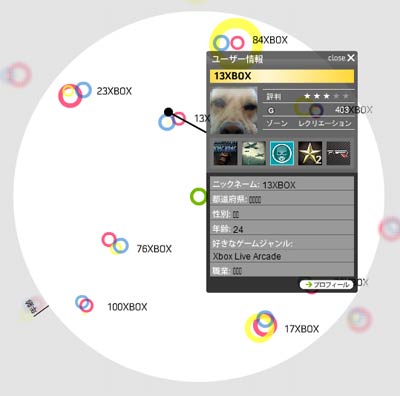 Much like Digg Swarm, the Flash-based application produces a very slick real-time map of player activity on Xbox Live. From what I could tell, you can also search for games or user profiles meeting specific criteria. The usermap even allows you to view personal profile information including reputation, gamerscore and nickname, their location, sex and age, favorite game genre and occupation. I’m assuming privacy advocates would have a field day with this in the U.S., so maybe that’s why we didn’t get this feature.

A translated version of the help page for the usermap can be seen here.