Not since the old Atari classic “Kool Aid Man” has there been such an odd video game / food tie-in. 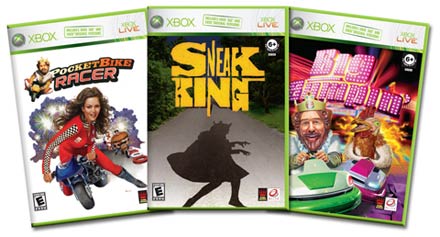 The Home of the Whopper has announced an promotion for the holiday season in which they will be offering three surreal Burger King themed games for the Xbox and Xbox 360. Titles include “Pocket Bike Racer,” “Sneak King,” and “Big Bumpin’.” The games will feature “popular” BK regulars including The King, Subservient Chicken and the highly untalented Brooke Burke. The games were developed by Blitz Games, known for such video gaming gems as “Bratz: Forever Diamondz” and “Bad Boys II” (although they also did Karaoke Revolution which wasn’t bad.)

For what it’s worth the games will only cost $3.99 each with the purchase of a value meal between November 19th through December 24th.

I’m still wondering why they didn’t adapt the classic, Burgertime.