Gears of War “the Must have Game of the Holiday Season”

Gaming blog Aeropause asked players who got to play a demo of the highly-anticipated Xbox 360 exclusive Gears of War last night in Chicago to report on their individual experiences. With virtually no exception, the early reactions were extremely positive. 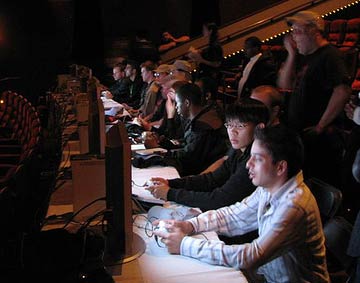 Here are a few choice excerpts:

After playing GEOW I now know that I will never play Halo again, at least until Halo 3. That’s right, GEOW is that freakin good.”

“Once we got past the bore fest that was Texas Chainsaw Massacre we got see in my opinion what is the must have game of the holiday season. The controls were great, even though you had to adjust for them, and the game is just plain old fun!”

“This game is amazing! The graphics are epic, no pun intended, and the gameplay follows suit.”

“The single player looks orgasmic and the MP is a joy to play.”

“I have yet to purchase an Xbox 360 and I decided to go to this event and see what the machine is capable of. I came away impressed with what I would call one of the best Multiplayer games I have ever played.

Gears of War releases on November 7, 2006 from Epic Games and Microsoft Game Studios. I think I know what I’ll be doing that night.