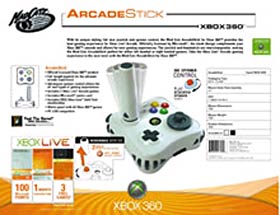 You can now pre-order the MadCatz ArcadeStick joystick for the Xbox 360 from Gamestop.

While not cheap at $59.99 USD, the controller looks like just what the doctor ordered for playing all the classic arcade games that are available for download on Xbox Live Arcade. The joystick is expected to be released on December 1, 2006.

There’s virtually no information available on this controller, but rumors are floating around that it includes some arcade games in the price, and we’re really hoping it will feature wireless connectivity.