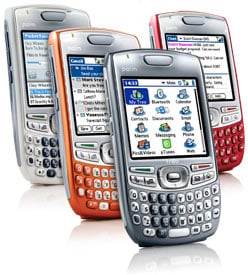 They come in four colors: graphite, crimson, arctic and copper (does anybody else out there think this is a Cingular exclusive?) and feature a smaller form factor than earlier models. The antenna has also been integrated into the case so it doesn’t stick out anymore.

The phones run Palm OS version 5.4.9 and feature 64MB of RAM, a square 320×320 pixel color screen and a 312MHz Intel processor. In addition to quad-band GSM/GPRS/EDGE phone connectivity, the Treo 680 have built-in bluetooth connectivity and an improved phone interface. Keep in mind that Palm is poistioning this as an entry-level device, so it doesn’t include wi-fi connectivity. Also on board is a VGA (why?) resolution digital camera and the ability to stream live audio.

Pricing has not yet been announced, but figure that phone carrier subsidies will keep the price low as is usually the case.