This may be old news, but since I never saw this commercial, I figured that some of you might not have either. The commercial is for Sony’s BRAVIA line of TVs and features a drop of over 250,000 multi-colored superballs down the streets of San Francisco.

And no, this wasn’t done with computer animation. Danish director Nicolai Fuglsig really did this all in real time, with real superballs. The clip was shot over 2 days back in July 2005. Special compressed air cannons were used to blast balls into the air, and industrial earth movers dumped thousands into the streets. 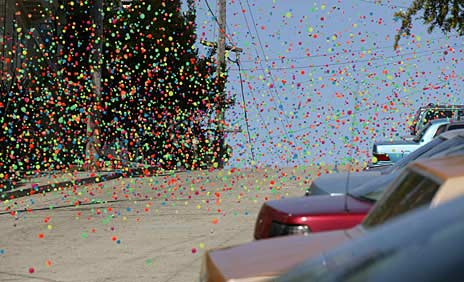 The YouTube version really doesn’t do it justice. You can download the high quality version of the commercial here.