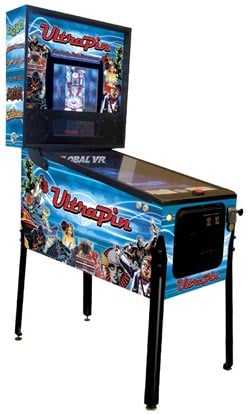 At this week’s Pinball Expo in Chicago, a little company called Global VR showed off their UltraPin pinball machine which brings back the feel of old pinball machines, but updates the concept for the 21st century.

The UltraPin is a digital pinball machine where the play field has been replaced with a 32-inch flat-panel monitor, and feedback system that lets you bump and tilt the machine like a traditional mechanical pinball machine, directly affecting gameplay in the digital realm. The cool part is that they’ve loaded the machine with emulations of classic pinball games including Attack from Mars, Sorcerer, Strikes & Spares, F-14 Tomcat, Medieval Madness and Xenon. They’re also selling six-packs of additional machines (including my some of my all time favorites, Black Knight 2000 and Firepower) which can be loaded onto the machine. The UltraPin runs about $6500.

More pictures can be seen here.