While it’s way to early in the game to call the Sony Playstation 3 down and out, there continues to be compelling evidence that the system does not have the graphical prowess of the more mature Xbox 360. 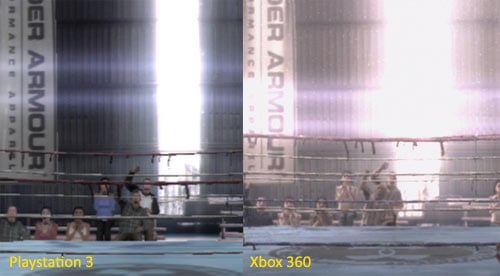 Gamespot recently conducted a side-by-side comparison of the graphics in several launch titles running on both the 360 and PS3. At best the PS3’s visuals were comparable to the 360, at worst, the PS3 was trounced in both texture detail and frame rate. Included in the evaluation was EA’s Fight Night Round 3, which EA was saying would have much improved visuals when compared to the Xbox 360 (including an “amazing sweat modeling engine”). Not only are the backgrounds and crowds arguably less detailed, the HDR lighting is far less realistic, and the game takes much longer to load. Now before you start flaming me with “but the game is a port” messages, the fact that they share the same library of models and textures should mean that the games would be nearly identical if the NVIDIA chip in the PS3 was as capable as the ATI chip in the Xbox 360.

That said, some future games such as Motorstorm do show promise in the graphics department. As is the case in every generation, it takes a while for developers to learn all of the intricacies and tricks of a new console. There’s no doubt that we’ll see better graphics on the PS3 in the future, but it’s unlikely that they’ll ever achieve the cinematic quality boasted by Sony’s hype machine.