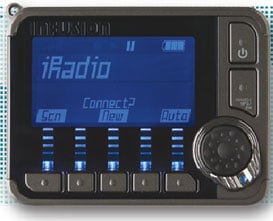 The Torian InFusion lets you listen to thousands of Internet “radio” stations wirelessly, with no subscription fees by downloading programming over a built-in WiFi connection. For ease of use, the player comes pre-loaded with settings for thousands of Internet radio streams, so you won’t have to hunt these down for yourself.

The portable radio measures just about 3.05″(w) x 2.34″(h) x 0.89″(d), and weighs in at just 3.5 ounces (making it smaller and lighter than the latest 30GB iPods). The InFusion features a cool backlit blue LCD to display track and station information. The player can also play MP3, AAC, OGG and RealAudio format tracks from an SD MMC card (not included). The radio also features a time-shift capability so you can pause live streams and resume playback later. Battery life is quoted at 5 hours for wireless streams and 8 hours for file playback via the player’s rechargeable Li-ion battery. The InFusion costs $229 USD and should be available by the end of the year.

Remember, since this radio requires an 802.11b connection to stream from the ‘net, you won’t be able to use it everywhere you go, just where you have a WiFi access point.