A few months back, there were rumors on the street that Dell was going to release a 27-inch widescreen LCD monitor. Now it appears that these rumors may be true. An image was leaked on the Dell website showing the inputs for the heretofore unseen flat panel. 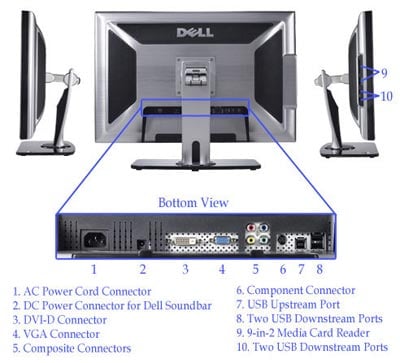 A Dell employee confirmed to website DailyTech that the image was from the training manual for their upcoming W2707C display. Further speculation is that the monitor is positioned to cross over Dell’s television and their computer monitor lines by including both computer inputs such as DVI and USB as well as television inputs such as component and composite, but not HDMI. The panel is assumed to use Samsung’s new 27-inch 1920×1200 glass, which would be sufficient for 1080p+ resolution.

Dell has generally received high marks for their 24-inch (2407WFP) and 30-inch (3007WFP) widescreen monitors, so I’m looking forward to checking this one out when it hits the street.