Belkin has introduced a new gadget which should be a godsend for musicians on a budget. The Belkin TuneStudion is a four-channel mixing board which features a dock for 5G iPods. The system records directly from the mixing board into the iPod at CD-quality. 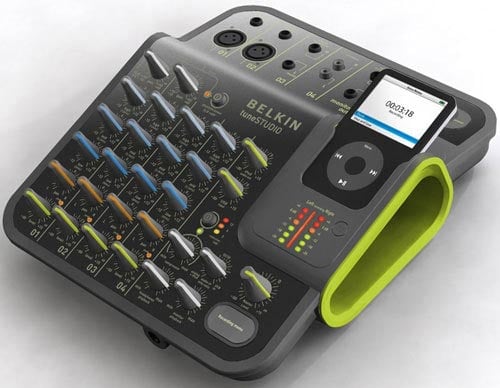 Priced at just $179.99, the board features some bells and whistles normally reserved for higher-end audio gear, such as XLR inputs with phantom power. Each of the four mixing channels has a 3-band equalizer, pan and gain controls. LED indicators show input, peaking and compression levels. You can also move tracks from the board directly to your PC using the integrated USB port, if you don’t feel like undocking your iPod. The TuneStudio should hit the streets sometime this Summer.