Not to be outdone by Apple’s iMac personal computers, HP has finally announced their much anticipated all-in one system, the HP TouchSmart. 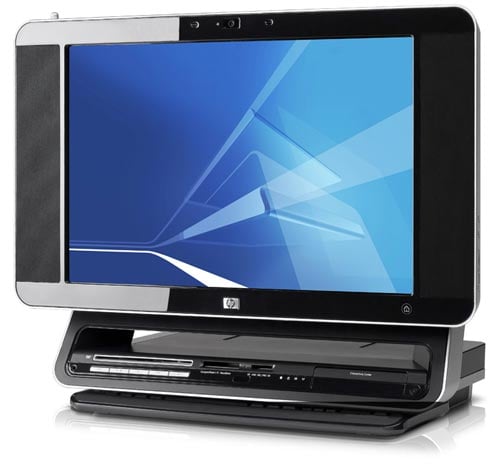 The first system in the series is the TouchSmart IQ770, featuring a fast, dual-core AMD Turion 64-X2 TL-52 CPU, 2GB of DDR RAM, a 320 GB hard drive and a SuperMulti DVD burner with LightScribe capability. The system comes with Windows Vista Home Premium pre-installed. Also included are a wireless keyboard and mouse, and built in WiFi and Bluetooth network interfaces.

The TouchSmart’s robust media capabilities include NTSC and ATSC tuners for both standard and high-definition (yay!) over-the-air television broadcasts. But the real unique feature of the show is the touch-sensitive 19-inch widescreen LCD screen (1440 x 900 resolution). This allows many of the features of the TouchSmart to be controlled without a mouse or keyboard. The system also integrates a 1.3 megapixel web cam, microphone, stereo speakers, and an 8-in-1 memory card reader.

The system’s dimensions – 18.88″ (l) x 21.77″ (w) x 11.37″ (h) are pretty comparable to those of the 20″ iMac, and unlike the iMac, the display can be adjusted in both angle and height. Apple still may win on styling and OS elegance, but in terms of on-board hardware, the TouchSmart might actually give the iMac a run for its money, with its powerful processing capabilities and more robust on-board media capabilities than the iMac currently offers.

The only real question is whether or not the TouchSmart will be priced competitively, since pricing has not yet been announced.