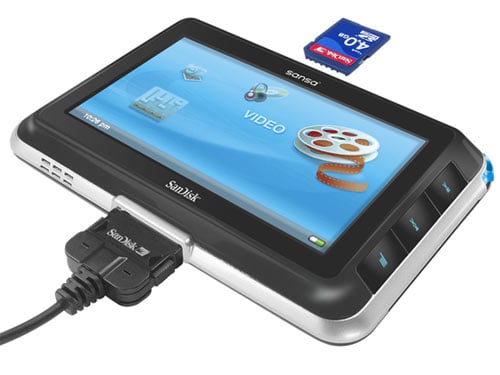 Priced at $299, the Sansa View features a nice 4-inch widescreen display, and can play music, videos and photos in a variety of popular formats. It comes with 8GB of on-board flash memory, as well as the ability to expand with SD/SDHC memory cards. It features a removable, rechargeable battery and since the player uses flash memory, you can expect better than average battery life too. You can also connect the player to your TV via a docking station and play back files at up to 1080i resolution. The Sansa View comes in a nice slim design that’s only 0.66″ thick (for comparison, the player is about 25% narrower and thinner than a Sony PSP).

The Sansa View should be available sometime before the end of March 2007.