Griffin’s latest entry into the iPod accessory fray offers a unique spin on the amplified speaker/dock combos that have popped up all over the place over the last few years – wireless speakers. 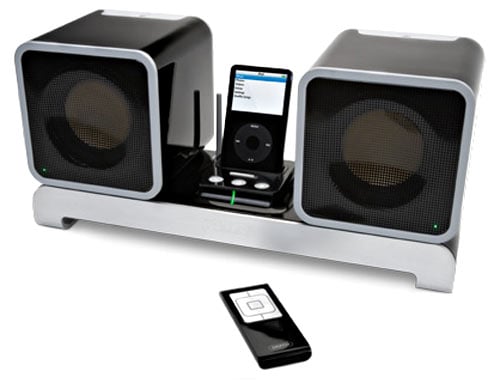 The Griffin Evolve Wireless Sound System features an innovative docking station which not only charges your iPod, it charges two wireless cube speakers. The speakers can play up to 10 hours of music on a single charge, and can be moved up to 150 feet away from the base station. The speakers also include an automatic sleep mode to save battery power when they’re not in use.

An RF wireless remote is also included which can be used to control the system from wherever you are. The docking station is compatible with all iPods released since the 3g model from a few years back.

Priced at $349.99, the Griffin Evolve should be available by this Summer. Griffin has also introduced two other iPod new sound systems, the Amplifi ($149.99) and the Journi ($129.99) which are worth checking out if you don’t need wireless capabilities.