I’ve seen plenty of devices that let you record digital notes, but all of the ones I know of require either special paper, special ink or a special pad. The IOGEAR Wireless Digital Scribe (GPEN200N) is the device I’ve come across that can capture handwriting from any surface. 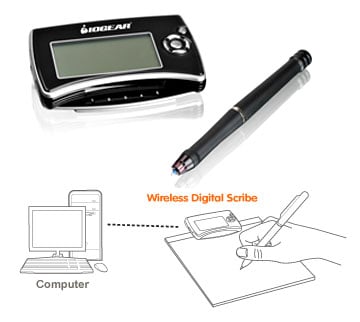 The device is comprised of a small wireless receiver that clips onto any notepad, along with a special digital pen that takes ordinary ink cartridges. The pen has its own internal memory for storage, and can upload captured data to your computer via USB 1.1 or 2.0 for later editing, annotation or coloring. In addition, when connected to a computer, it can capture directly into the PC in real time. Expected to be released sometime in Spring 2007, the wireless version will run $130, with a wired version expected to run about $80.