Looking for a Low Maintenance Pet?

If you’re just too lazy to clean your filthy cat box, or don’t want to worry about picking up another bag of Tender Vittles, have I got a pet for you! 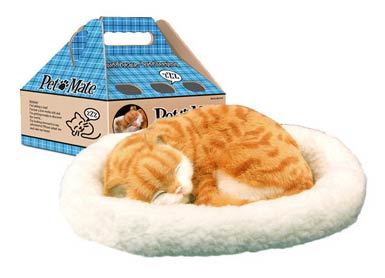 The creepy FurReal Breathing Cat is an artificial pet that lays on its own little bed and looks like its breathing. The “realistic breathing action” is supposed to last for several weeks on a single set of batteries, but I’m pretty sure if you’re too lazy to take care of a real cat, you won’t bother changing the batteries on this one either.

[via Thoughts from the Sidelines]