Autonomous Solutions has developed a robot, known as Chaos, specifically for use in hazardous situations too dangerous for human personnel. The robot has a unique 4-tread design that lets it maneuver through difficult environments. 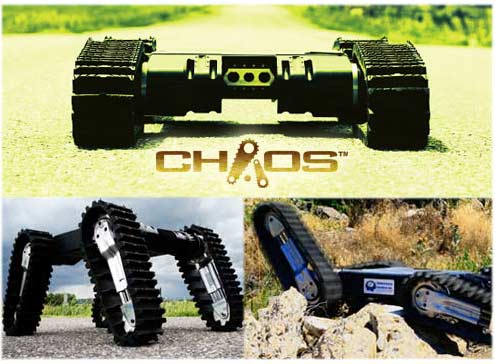 According to Autonomous, Chaos is made for challenging jobs like explosive disposal, search and rescue, hauling gear and “other dull, dirty or dangerous tasks.” The robots self-correcting track system allow it to cover environments ranging from stairs, to gravel and rubble piles, to steep piles of debris.

Since the robot also may be used for surveillance and reconnaissance missions, it’s designed to produce virtually no motor or gear noise. The compact ‘bot weighs in at 120 pounds, and is designed for quick, modular repair and assembly in the field. The robot is designed to be able to carry additional payloads such as sensors and robotic arms.

Chaos is designed to be controlled by a remote operator using their customizable Mobi remote control unit. The remote is a sophisticated, tablet PC-based device, with interchangeable controllers, such as joysticks, switches or scroll wheels. It’s designed to handle adverse environmental conditions such as wind, rain, dust and extreme temperatures.