With just about every device from cell phones to watches embedding portable media players these days, I thought it might be fun (and maybe a little bit educational) to take a walk down memory lane and examine the evolution the portability of music and media over the last 50-odd years. 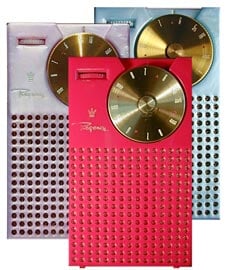 Back in 1954, I.D.E.A. released the very first portable transistor radio. The Regency TR-1 radio measured 3″ x 5″ x 1.25″ and featured an analog AM tuner. In a strange prediction of things to come (I’m talking to you iPod), the Regency came out in a variety of colors over the years, ranging from a simple bone white to pearlescent lavender and lime colors.

The TR-1 tuned stations by a simple gold dial and played through a low-fidelity monophonic speaker. It retailed for $49.95 back in the day, which would make it cost around $325 in today’s dollars. 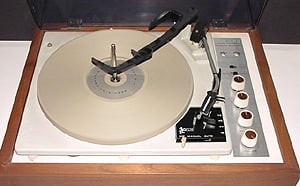 With the companies he founded still making an impact on today’s audio scene, Henry Kloss developed the very first portable stereo back in 1962 when he released the KLH Model 11.

The Model 11 was the first transistorized stereo system, and featured a record player, amplifier and two speakers which all folded neatly into a “suitcase” for easy transportation. While the stereo only ran on A/C power, not batteries, it still was a milestone in the development of portable music players. 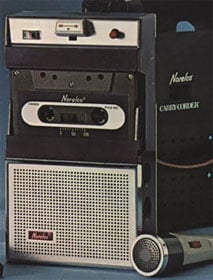 Philips Compact Cassette and the Norelco Carry-Corder 150
In 1965, Philips released the first ever compact cassette tape. Originally designed for recording dictations and other boring stuff, the cassette recorded up 45 minutes of sound on single 1/8-inch tape.

To compliment Philps’ innovation in recording media, they released the battery-powered Carry-Corder 150 cassette recorder. It ran on 5 flashlight batteries and weighed in at over 3 pounds (fully loaded). Later, Mercury Records would release a selection of music on Philips cassettes for about $6 a piece. Cassette and 8-track tapes would dominate the portable music world for the next 20 years. 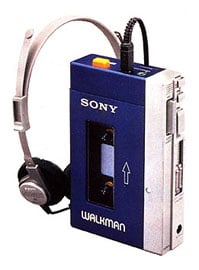 Sony Walkman TPS-L2
Back in the 1970’s and 1980’s Sony was the king of miniaturization, and in 1979, they released the first truly self-contained portable music system, the TPS-L2 Walkman cassette player.

The Walkman’s real innovation was its size, measuring only slightly larger than a cassette tape itself. Featuring a pair of portable, lightweight headphones and operating on AA batteries, it ushered in a new era of portability. The original Walkman retailed for 33,000 Japanese Yen, which would be around $274 US dollars today. The Walkman went on to sell millions of units and spawned numerous variations and imitators for many years after its initial release. 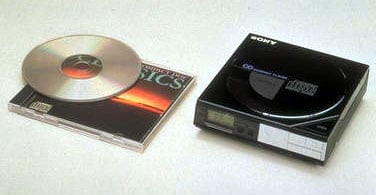 As CDs overtook cassette tapes in both sound quality and popularity, Sony saw the need to update its popular Walkman line for a new generation.

In 1984, on the one year anniversary of the introduction of compact discs, Sony introduced their D-50 portable CD player, the first ever portable digital music player. The D-50 was actually my own first foray into portable music players, and it truly was a marvel. Just slightly larger than a CD case, the player offered all of the great audio quality that digital recordings had to offer. 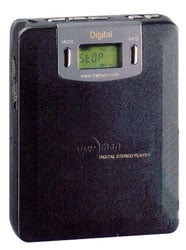 SaeHan / Eiger Labs MPMan F10
The very first solid state commercial music player didn’t come from Apple, Diamond or Creative as many think. In fact, it came from a Korean company called SaeHan Information Systems, and was imported to the U.S. by Eiger Labs. The MPMan was the very first MP3 player of all time. It featured a whopping 32MB of RAM (expandable to 64MB by sending the player back to Eiger for an upgrade,) and held about 8 average length tracks (around 32 minutes of music.)

The MPMan appeared on shelves in the summer of 1998, and ran on a rechargeable NiMH battery pack. Since the player used solid state memory, it actually had about 9 hours of battery life, which is still better than many hard drive based players today. 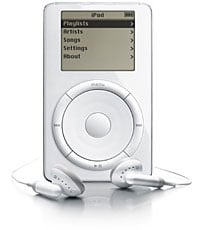 Apple iPod and iTunes
Leave it to Apple to stand back, look at what other companies were doing wrong, and to vastly improve upon their mistakes. The original iPod, released in 2001 combined a 5GB hard drive with a rechargeable battery pack and a paradigm breaking user interface. Marketed by Steve Jobs as “1000 songs in your pocket,” the iPod didn’t necessarily do that much differently under the hood from other MP3 players, but it had a sleek design (by 2001 standards), a unique and simple navigational system, and the Apple brand name to back it all up.

Initially, the iPod only supported Macintosh computers, and the only way to get music tracks was to record from your own CDs or from (often illegal) downloads on the Internet. In 2003, Apple released iTunes and opened their iTunes store, which made it easy to purchase legal music downloads for just 99 cents a track. Shortly afterwards, they introduced a Windows-compatible version of their software.

With their one-two punch of form and function, Apple continues to dominates the portable music player market today. Over the years Apple has continued to release a plethora of new iPod models, including the recent addition of video playback, and the forthcoming iPhone.

Only time will tell how portable media players will evolve. With innovations like touchscreens, high definition video playback, wireless streaming, low cost solid state memory and more on the horizon, the first 50 years were just the beginning.