Is That a Banana in Your Stratosphere, or Are You Just Glad to See Me?

A French-Canadian artist is working on a plan to launch a gigantic banana-shaped blimp into orbit above the state of Texas. 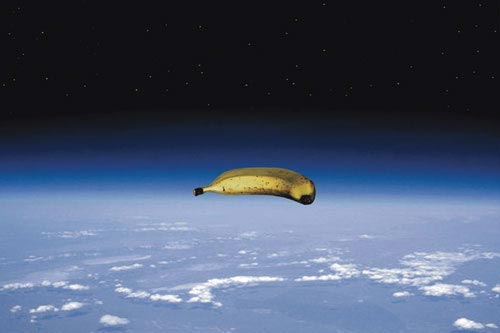 The project proposes a 300-meter, helium filled banana floated skywards, to hover over the Lone Star state. Artist Cesar Saez claims to have raised tens of thousands of dollars towards his goal of $1 million that will be needed to launch his work, entitled Geostationary Banana Over Texas.

Why, you may ask, would you spend taxpayer dollars to launch a giant fruit into space? According to the artist, “Texas is as symbolic as the banana… The banana has a lot of symbolism: phallic, humour, and political, too.” If that’s his only criteria, why not launch a giant penis into space?