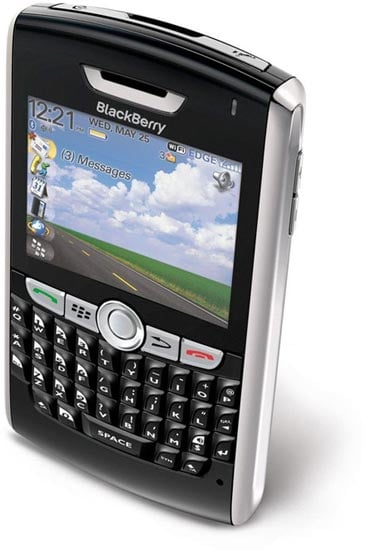 The 8800 is a full quad-band GSM/EDGE phone, and lifts many of the features found in the popular BlackBerry Pearl model, such as its well-received trackball navigation. The phone has a solid 320 x 240 pixel color display with light sensing technology to automatically adjust screen brightness depending on ambient light levels.

Since the 8800 has added both media player software and expandable memory via an SD slot, it has the potential to be your primary media player now. Built-in GPS and mapping features are also included.The 8800 also features enhanced battery life, with a standby time of 22 days and talk time of 5 hours. As is the case with other full-sized BlackBerries, this one also has the standard full QWERTY keyboard, push/pull e-mail, web browsing, calendar and contact management capabilities.

The BlackBerry 8800 should be available from major carriers (Cingular/AT&T for sure) later this month, but pricing has not been announced yet.