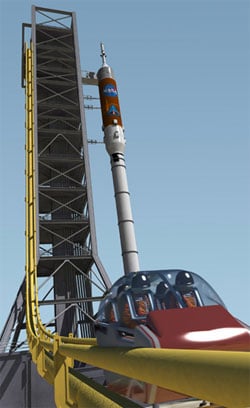 NASA is thinking about a new technology to save the lives of astronauts if something goes wrong at launch time. The proposed new emergency escape system is actually based on those vertical drop roller-coasters that have popped up at amusement parks around the country.

The idea is that if something were to happen on the launchpad, endangered flight crew could hop into the roller coaster which would rapidly drop towards the ground, then away from the location of the rocket. The proposed