The guys over at Destructoid dug up this $10 beauty. It’s a cheap gaming system which looks NOTHING like Sony’s PlayStation 3, but has the audacity to package itself as a “SONY PS3.” 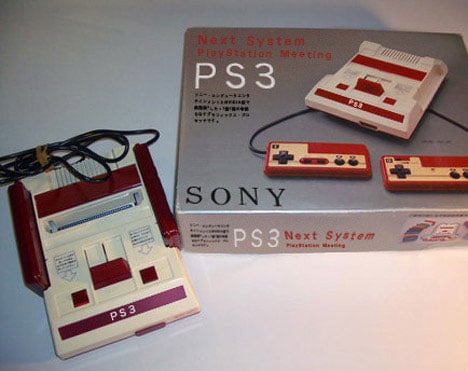 The system actually appears to be one of those shoddy “Famiclone” systems designed to play old games from the Nintendo Entertainment System (aka “Famicom” in Japan.) My favorite part of the packaging has to be the bad Engrish translation that reads “Next System PlayStation Meeting.” For some reason, I don’t think you’ll be able to cram your Blu-ray disks in this one. At least this console is still offering backwards compatibility, even if it is just with old NES titles.

[Personally, I’m apt to call “Photoshop” on this one, but I still think it’s amusing.]