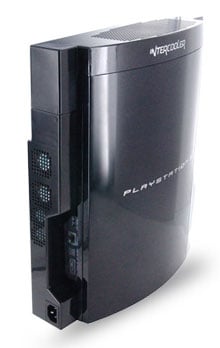 Nyko revealed their new cooling system for the Sony PlayStation 3 console this week, and all I can say is: does anyone really need this?

The $25 Intercooler for PlayStation 3 features a whopping FIVE additional fans, and wraps around the back, bottom and side of your PS3, making the mammoth console just that much larger, and ruining the console’s virtually silent operation.

While overheating has been a huge issue for Xbox 360 consoles, I’ve heard virtually no reports of heat issues with the PlayStation 3, due to its superior cooling design. I suppose if you’re paranoid, or expect to place your PS3 in a very confined location, supplemental cooling couldn’t hurt, but to me it seems like overkill.

If you think I’m wrong, or if you’ve had heat problems with your PlayStation 3, I’d love to hear from you. But for now, I’ll stick to my stock version.