Itower Omega: Give Your iPod a Lift 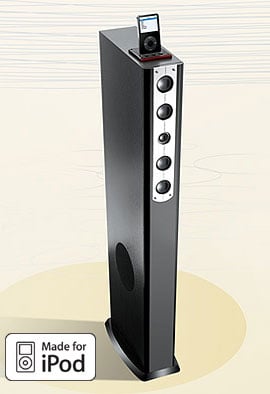 Usually, I just write off most stuff that mall-dweller The Sharper Image puts out as either too pedestrian, too tacky or both. However, I’m gonna give them a break on this one. Their new iTower Omega is actually quite striking, integrating an entire iPod-ready stereo system into a handsome looking black tower.

It stands almost four feet tall, and has a nice black-cherry wood finish (laminate, though.) A media player dock sits on top and works with any iPod with a docking connector.

The $299 iTower Omega features four stereo speakers, a single dome tweeter, two subwoofers and 60 watts of amplification under the hood. Frequency response is nothing to write home about at 100Hz to 16KHz, and I can’t imagine that stereo imaging will be very good, given the design. However, if you’re looking for a sleek way to incorporate an iPod sound system into your room, this one looks as good as anything out there.