With all the recent buzz about how Blu-ray is leading HD DVD in the high definition “format war,” there’s a new wildcard that could shake things up. 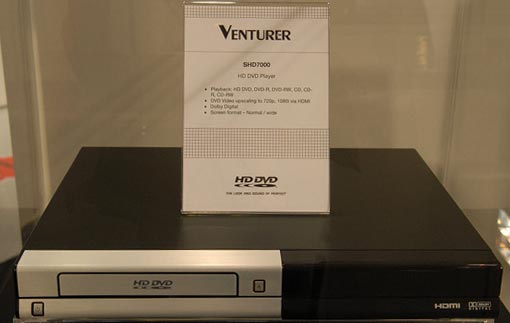 While Sony certainly has a leg up on the race with millions of PlayStation 3 consoles out there, one big road block to broad adoption of either high definition disc format is the high cost of standalone players. Most standalone Blu-ray players cost between $500 and $900 and most HD DVD players cost between $400 and $700. With prices that high, it might be a long time before the “great unwashed” dive into either format.

Now, a company from Canada, Venturer, is working on an Chinese-manufactured HD DVD player which could reach the market for under $200. The bargain basement Venturer SHD7000 certainly won’t have the build quality of $500+ players, but the price could be enough to convince the masses that it’s time to upgrade from plain old DVD.