[NOTE : This post originally appeared on April 1, 2007, and was an April Fools Day joke. Vista does not include a copy of BOB, but if you scroll down to the comments, one of my readers has posted a link to a download of the original BOB installer if you really want to run it.]

It turns out that the folks over in Redmond might have a sense of humor after all. I was working on getting my new install of Vista Ultimate up and running on my machine this weekend, and stumbled across this awesome easter egg.

It turns out that there’s an entire functional copy of the 1995 Microsoft BOB operating system hidden inside of Windows Vista. BOB was supposed to be an easy-to-use interface for Windows 3.2, complete with fuzzy animated characters (who eventually led to “Clippy” the paper clip in Microsoft Office.) 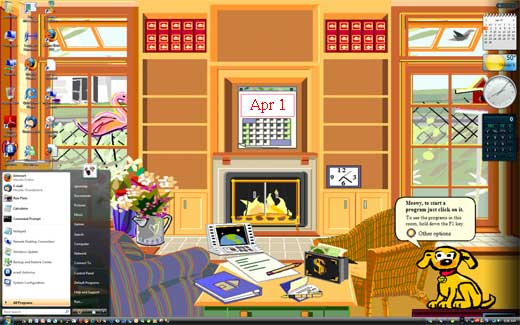 Here’s how I managed to activate it:

First, you need to make sure you have full administrative permissions on your machine. Then, go to the Start menu and enter “W.0.w.B.0.b.” (note that those are Zeros not Os) while holding down the Alt key. Then, set your system time zone to “Cairo”. The next time you reboot, type in the same phrase backwards and you’ll be in the Windows Bob environment, complete with all of the original features. Once BOB is activated you can set your clock back to your regular time zone.

Surprisingly, the new version of BOB has been updated to include integration with Outlook 2007, so you can actually see your calendar entries and e-mails in the BOB organizer. Post back and let me know which character is your favorite. Personally, I like Scuzz the Rat.