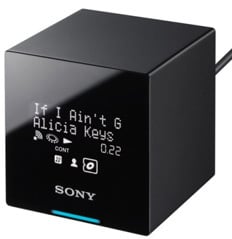 Sony has introduced the latest in their Digital Media Port line of accessories for their Bravia audio systems, the TDM-NC1.

The $199 device lets you wirelessly stream music (ATRAC, AAC and WMA formats) from your PC to your Bravia home entertainment system (assuming you have one of the models with Sony’s proprietary Digital Media Port.) While the tiny 3-inch black cube looks really cool, it does have one significant limitation – it can’t stream DRMed tracks from any place other than the Sony Connect store.

Surprisingly, it also doesn’t appear to stream the files in the ubiquitous MP3 format. This is a clear case where form and function didn’t go hand in hand. Too bad.