Samson Zoom H2: Surround Sound Recording in the Palm of Your Hand 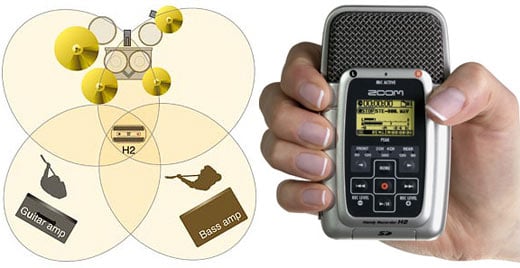 Thanks to its microphone configuration, the recorder can accurately capture stereo positioning as well as 5.1 surround positioning when you record in 360° 48kHz/24-bit mode. The device can record 16-bit or 24-bit WAV files at up to 96kHz, and MP3 files at up to 320kbps. When equipped with a 4GB SD memory card, it can capture up to 2 hours of the 96kHz WAV files, or up to 138 hours in MP3 format. You can record for about 4 hours on a single set of AA batteries, or plug it into the included AC adapter for longer sessions.

The H2 includes a 512MB SD memory card, USB cable and a handy tripod stand. It should be available later this Spring for around $200.