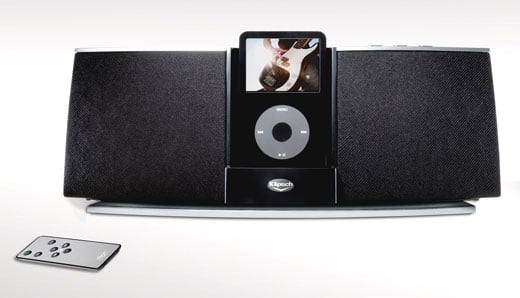 The compact bookshelf system features Klipsch’s exclusive horn driver technology for high and mid-frequencies, and then a pair of 2.5-inch ported subwoofers for solid bass reproduction. The dock can handle any iPod with a 30-pin connector, and will charge the player while docked. An infrared remote lets you control the iPod and volume level from across the room. It’s also got an integrated S-Video output for displaying clips from video-capable iPods on your television.

Unlike the myriad over-the-top iPod docks out there, the iGroove system features a clean, sophisticated design that will integrate into just about any setting. It’s even designed to be wall-mounted with an optional bracket.

The iGroove SXT is expected to be released in early May and retail for $169.99.