Sure, there have been many so-called “force feedback” controllers for computers and video games, but this is the first time I’ve seen one that really means it. 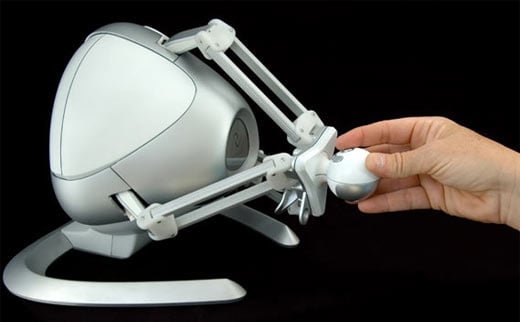 Unlike most force devices which simply vibrate or drag, the Novint Falcon lets you control in 3-dimensions and actually can push against your grip with as much as 2 pounds of force. The controller could be used for everything from medical training to some really immersive video gaming.  The device can create realistic impressions of weight, recoil and shock, making it perfect for FPS games. Imagine being able to reach out and grab a “baddie” in a game, and actually have him pull against you. How about an online match of arm-wrestling against your friend on the other side of the country?

While the device probably won’t be useful for day-to-day computer control, if you’ve got a couple hundred bucks to drop (pre-orders are $189, including 24 mini-games) it looks like it could be pretty cool.