If you’re into classic arcade games, you might want to check out this new home arcade gaming system from DreamAuthentics. 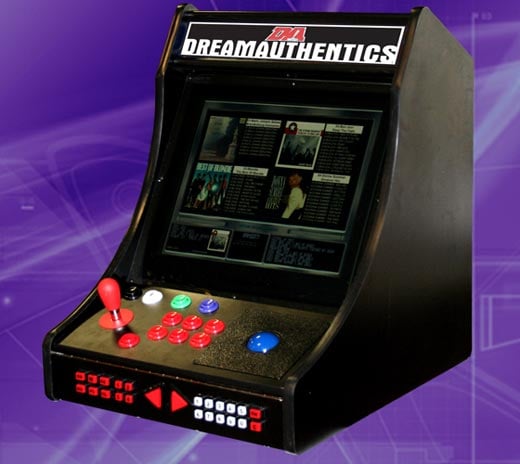 Each Katana personal arcade system is custom assembled, so you can pick your own selection of console graphics and marquees, as well as the control scheme. The base system ships with over 200 licensed arcade classics, and since the system is based on a Windows box, you’ll also be able to play PC games on it too.

Standard controls include a true arcade joystick, buttons and trackball. Optional upgrades let you add a spinner, side-mount pinball buttons, a mini-racing wheel or a light gun among other things. Visuals are presented on a nice bright 17″ LCD flat panel, so you don’t need to worry about the burn-in that arcade CRT screens can get. The built-in sound system has stereo speakers plus a subwoofer for some extra thump. In addition to a nifty arcade game menu system, it’s got a cool digital jukebox interface that looks a lot like the ones you’d see in your neighborhood bar.

The Katana weighs in at about 70 lbs. and is designed to be placed on top of a table or countertop. The base configuration runs $2495 for a complete system, with most add-on options costing between $50 and $200 each.