If you own an Xbox 360, you already know the crack-like addictive powers of the retro-mod arcade shooter Geometry Wars: Retro Evolved. 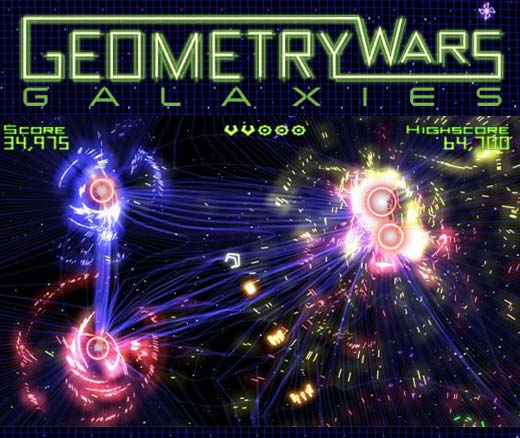 If you’re a Nintendo fan, you’ll now be able to get in on the action. Sierra Entertainment today announced that Geometry Wars: Galaxies, a follow up to the frantic 2D game is coming for the Nintendo Wii and DS. Both the Wii version and the DS version will take advantage of the unique control schemes of each device. There will also be bonus unlockable content when you link up your Wii and DS via Wi-Fi.

In addition to a variety of new levels, the game will include a full remake of the Xbox 360 classic. The new game will also feature battle and co-op multiplayer modes, which I can’t wait to check out.

While the original series was developed by Bizarre Creations, the port is being developed by KUJU Entertainment, who’s also working on the highly anticipated PSP 2D/3D platformer, Crush. Geometry Wars: Galaxies should be available for both Nintendo systems sometime this fall.