The new technology, called Super Hi-Vision (SHV) was shown off to reporters in Tokyo recently, and has an astounding 7680 x 4320 resolution. To put that in perspective, you’d need to connect sixteen of the highest resolution 1080p monitors you can buy in a 4 x 4 grid to reproduce that quality. 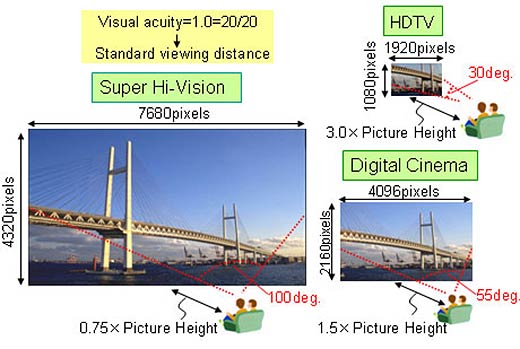 Don’t throw away your new HDTV just yet. For now, SHV will be reserved for only special venues where bandwidth can be doled out in a controlled environment. It will be many years before broadcast and wired networks will be capable of handling this volume of data.

Uncompressed, SHV signals require a whopping 24 Gbps of bandwidth, which is completely impractical to broadcast. Japanese broadcaster NHK has managed to cram that down to “just” 128Mbps, that’s still six to eight times more bandwidth than today’s highest quality over-the-air high def programming, which is already suffers from a dearth of available bandwidth.

[via Digital World Tokyo via Ubergizmo]