The latest media player from iRiver has got to be one of the most beautifully designed gadgets I’ve seen in a while. 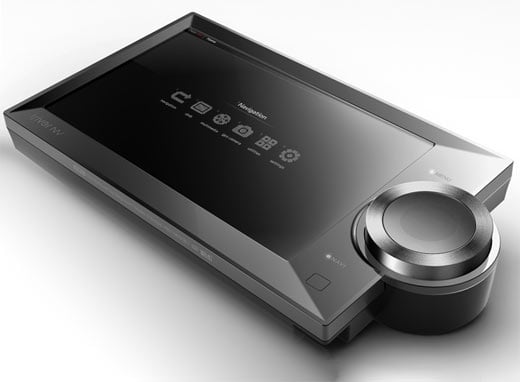 The iRiver NV features a clean minimal design with a large 7-inch LCD screen. Its primary input device is a dramatic scroll wheel, which happens to feature a functional color display in the middle of it for displaying context-sensitive icons and information.

The player doesn’t just look drop-dead gorgeous, it’s loaded with just about every feature you could want. Sure, the player can handle a wide variety of audio and video formats, but it’s also got GPS navigation under the hood and can receive DMB digital television signals as well. There’s also a digital camera (although it’s only 1.3MP), and an FM transmitter for broadcasting sound to your car stereo.

The display has a nice white LED backlight for low power consumption, and a whopping 800 x 480 resolution, which should make anything you play on it look great. The clean Flash-based interface is also quite striking, and as a side benefit, allows the player to handle Flash content.

At this point, all we know about the NV is that it’ll ship in Korea later this year, but I’m hoping we’ll see it or some similar model in other parts of the world sometime in the near future.