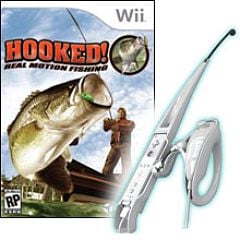 The upcoming fishing game HOOKED! Real Motion Fishing for the Nintendo Wii will ship with a goofy looking fishing rod attachment for the Wii’s controller. While the Wii-mote will be used as the fishing rod, you’ll rapidly “reel in” the line by using your Nunchuk controller.

HOOKED! claims to offer a totally realistic fishing experience (let’s hope it’s better than the silly fishing exercises in Zelda) including photorealistic bodies of water with lots of aquatic life to pluck. The game will include online multi-player, and three single player modes as well (Practice, Time Attack and Tournament.)

It’ll cost about $59 when it comes out this September, which is $10 more than most Wii games, presumably to cover the cost of the controller add on. Bait not included.